Sierra Leone, officially the Republic of Sierra Leone, is a country in West Africa. It is bordered by Guinea to the northeast, Liberia to the southeast and the Atlantic Ocean to the southwest. It has a tropical climate, with a diverse environment ranging from savanna to rainforests. The country has a total area of 71,740 km2 (27,699 sq mi) and a population of 7,075,641 as of the 2015 census. Sierra Leone is a constitutional republic with a directly elected president and a unicameral legislature. Sierra Leone has a dominant unitary central government. The president is the head of state and the head of government. The country’s capital and largest city is Freetown. Kenema, located 185 miles from Freetown, is the country’s second most populous city. Other major cities with a population above one hundred thousand are Bo, Koidu Town and Makeni. Sierra Leone is made up of five administrative regions: the Northern Province, North West Province, Eastern Province, Southern Province and the Western Area. These regions are subdivided into sixteen districts.

Sierra Leone became independent from the United Kingdom on 27 April 1961, led by Sir Milton Margai, who became the country’s first prime minister. In May 1962, Sierra Leone held its first general elections as an independent nation.

About 16 ethnic groups inhabit Sierra Leone, each with its own language and customs. The two largest and most influential are the Temne and Mende. The Temne are predominantly found in the northwest of the country, and the Mende are predominant in the southeast. Comprising a small minority, about 2%, are the Krio people, who are descendants of freed African-American and West Indian slaves. The Krios are overwhelmingly found in the capital Freetown and its surrounding countryside. Although English is the official language, used in schools and government administration, Krio, an English-based creole, is the most widely spoken language across Sierra Leone and is spoken by 97% of the country’s population. The Krio language unites all the different ethnic groups in the country, especially in their trade and social interaction.

Sierra Leone has relied on mining, especially diamonds, for its economic base. It is also among the largest producers of titanium and bauxite, is a major producer of gold, and has one of the world’s largest deposits of rutile. Sierra Leone is home to the third-largest natural harbour in the world. Despite this natural wealth, 53% of its population lived in poverty in 2011.[12] Sierra Leone is a member of many international organisations, including the United Nations, the African Union, the Economic Community of West African States (ECOWAS), the Mano River Union, the Commonwealth of Nations, the African Development Bank and the Organisation of Islamic Cooperation. 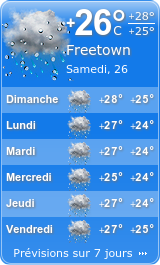